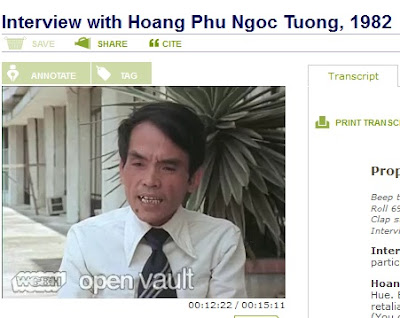 Propaganda of casualties at the Battle of Hue

Interviewer: Please continue.
Hoang Phu Ngoc Tuong: Ngo Dinh Diem was truly a fascist. I lived here throughout the Ngo Dinh Diem period. And I realized that Diem wanted to become another king. Formerly Diem had been a high court mandarin. For example, Diem’s family, which lived hear the Phai Cam bridge here in Hue, forced all the intellectuals, bureaucrats, and university professors to wear ancient garb to come to the courtyard every year on the occasion of Tet and (unreadable) there, chanting New Year’s wishes and Long Life to Ngo Dinh Diem, his mother and other members of his family.
His mother was sitting on a golden throne observing all the rituals. This alone shows you what Diem meant by democracy. In fact, you can say that there was no such thing as democracy. There was only a feudal and fascistic system. This was what his family was like. As for his (Diem’s) policies, he strived to eradicate all the democratic freedoms of the ordinary people. For example, he issued a law code called...
His aim was to annihilate all the Communists. And this was what the Americans wanted him to do. SO he had to get rid of all the influences of the August Revolution in this city, a city which brought down the monarchy and hoisted the banner of the August Revolution. And so all the families whose children had been regrouped to the north (after the Geneva Agreement) were one by one imprisoned, exiled and tortured until they denounced their loved ones.
After that, there were many families who tried their best to hide the fact that they had children and relatives who were now regrouped to the north. This was the kind of anti-Communist which forced the population to forget the color of the banner of the revolution. From then on, the repression went full speed ahead and every possible means was used. One of the means was that women whose husbands were now regrouped to the north and who were pregnant were kicked in the bellies until they aborted.
The torturers said that you could not allow even a single drop of Communist blood in the belly of any woman in the south. This and other means were employed through the use of the Law Code no. 10/59 which Diem had decreed. In Hue at that time there was a very infamous place for imprisoning people called the “Nine Tunnels”. Patriots were kept there. When the Diem regime was toppled we went into those tunnels to rescue the prisoners and saw that most of them were like jungle people.
That is to say, they had long beards and hair and just skin and bones. These prisoners had to sit on platforms where rain water leaked down and where their feet were soaked in water year in year out. They could only sit up, and their behinds and backs were all infected. They did not look like human beings anymore and they were put there until they died. This was the very infamous “Nine Tunnels” where unprecedented repressive means were carried out against those considered to be Communists.
I don’t know how cruel Hitler was, but I can certainly say that there were no crimes against human beings which resembled the crimes committed by the Diem regime here during the post-Hitler era. As far as religious freedoms were concerned, Ngo Dinh Thuc, Diem’s brother and the archbishop in charge of this area, forced all Buddhist and all non-religious people to worship as Catholics. On Buddhist anniversaries they forbade all Buddhist banners to be put up. This led to the Buddhist uprising and, subsequently, the city-wide protest which led finally to the downfall of Ngo Dinh Diem.
at 10:42 PM