The son of a bitch Quang Do which is Chinese by root is lying through his teeth!!! 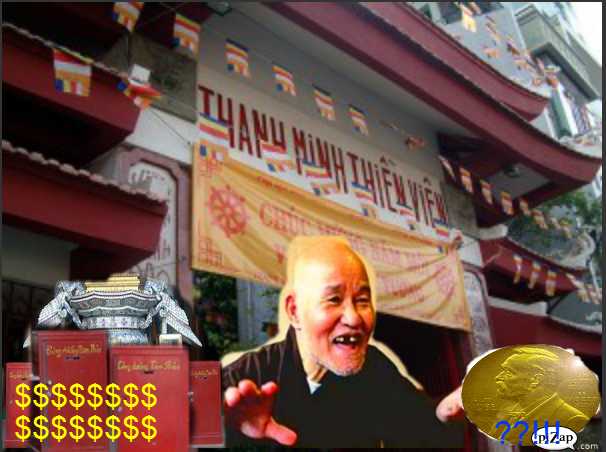 The son of a bitch Quang Do which is Chinese by root is lying through his teeth!!! Quang Do and his Unified Buddhist Church of Vietnam collaborated with the Communist Viet Nam to overthrow the governments of South Vietnam back in the 60s. The struggle that the son of a bitch Quang Do spoke of was in no way correlate to what the people of Tibet are struggling for right now against the Chinese Han!!! The self-immolation of Thich Quang Duc in 1963 was carefully calculated and choreographed by the UBVC under the direction of Thich Tri Quang who was a known communist agent!!! Their purpose was to rouse public anger and incite hatred toward the government of South Vietnam in their struggle along side with the Communists to topple Ngo Dinh Diem.
Therefore, the vision that the UBCV said they shared with the Buddhists in Tibet were complete lies!!! Their vision back in 1960s was to use Buddhism as a pseudo political tool in an attempt to share power with the Communists to rule the people of Vietnam!!! Did they understand the griefs and pains when the UBVC collaborated with the Communists to kill thousands of innocent people in Hue in 1968??? Did they understand peaceful protests when they hid weapons such as guns, hand-grenades, knives, and clubs inside their monasteries and temples to aid the Communists???
The world see the people of Tibet struggled. The world see the repression of the Tibetans by the evil Chinese rule. On the other hand, Quang Do and his UBCV asked the oppressed people of Vietnam to stay inside their own homes in protest the Communist rule!!! What does that mean??? Well...it means that Quang Do wanted the people of Vietnam to be under house arrest of their own will and volition in order to keep the Communist regime to stay in power!!! Don't forget that the monastery, the so called Thanh Minh Zen Monastery that Quang Do is kept under house arrest is worth millions of dollars, with a collection of exotic plants and trees!!!
That's the difference between the struggle of the son of a bitch Quang Do and his UBCV versus the People of Tibet and their struggle against the Chinese rule!!!
tieudietcs!!!
P.S. Is there such teaching in Buddhism to have a title that of the "Supreme Patriarch" ??? compared to that of the Simple Monk Dalai Lama??? 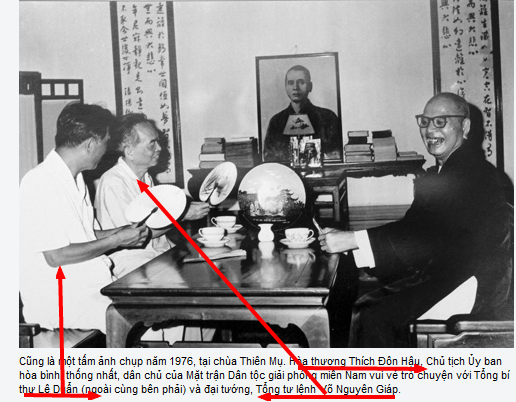 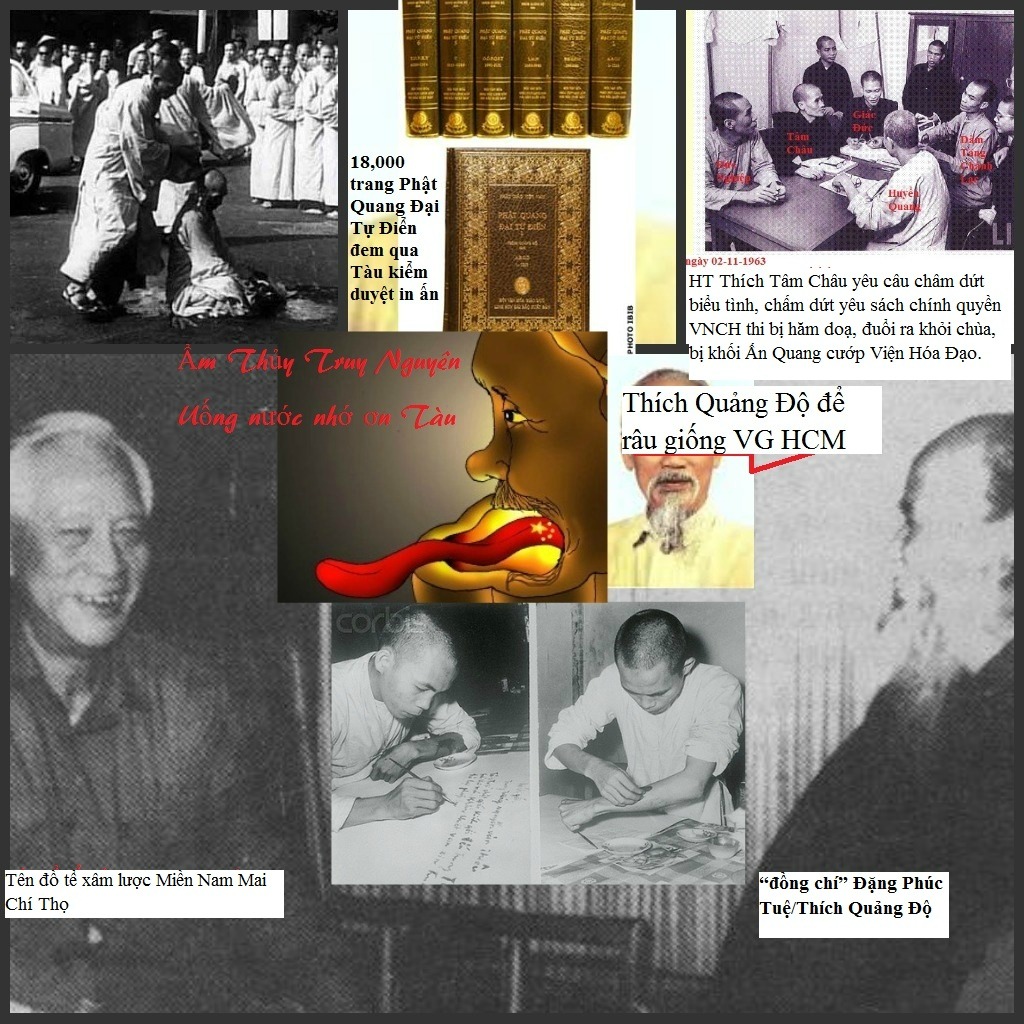 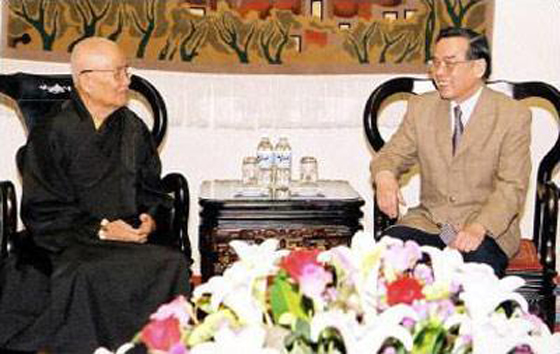 Is this self-immolation or someone is doing the immolation?
http://groups.yahoo.com/group/GoiDan/message/124950
Anh Ly

PARIS, 16 February 2012 (IBIB) - Following the recent wave of self-immolations by Tibetans calling for religious freedom, and the ensuing brutal crackdown on these protests by the Chinese authorities, the Most Venerable Thich Quang Do, Patriarch of the outlawed Unified Buddhist Church of Vietnam (UBCV) has written to His Holiness the Dalai Lama to express the UBCV’s support of the Tibetan people’s struggle for freedom. The letter, dated 11 February 2012, was sent clandestinely to theInternational Buddhist Information Bureau (IBIB) from the Thanh Minh Zen Monastery in Saigon, where Thich Quang Do is under house arrest. In his letter, which we have forwarded to H.H. the Dalai Lama in Dharamsala, Thich Quang Do wrote:

“I am writing to express the profound grief of the Unified Buddhist Church of Vietnam on the recent wave of immolations of Buddhist monks, nuns and lay-followers calling for religious freedom and the return of Your Holiness to the sacred land of Tibet. I am informed that 21 people have self immolated over the past year, with five immolations in the past week alone. These tragic acts have not only taken place in the region of Tibet proper, but also in counties in the Chinese provinces of Qinghai and Sichuan, where many Tibetans live.

“Instead of investigating the cause of these acts of protest, the Chinese government has cracked down with intolerable brutality. Vast regions have been sealed off, media black-outs imposed, and Police have shot dead at least six Tibetans in Kham county in Sichuan. Despite this merciless repression, thousands of Tibetans continue to challenge the authorities by organizing candle-light vigils, hunger strikes, marches, and peaceful demonstrations with banners calling for a “free Tibet” and the release of all Tibetan political prisoners.

“I was especially moved by the words of Lama Sobha, who self-immolated on January 8th 2012 at his monastery in Golog in the Tibetan area of Amdo, Qinghai. In a moving tape recording made prior to his immolation, he called on Tibetans to unite to protect Tibetan culture, religion and language, and explained the reasons for his immolation: “I am giving away my body as an offering to chase away the darkness, to free all beings from suffering”.

“We Buddhists in Vietnam share this vision with Buddhists in Tibet. Self-immolation is indeed a tragic and extreme act, one that should be avoided at all costs. But there are moments when this ultimate gesture, that of offering one’s body as a torch of Compassion to dissipate darkness and ignorance is the only possible recourse.

“At the height of the Vietnam War in 1963, Bodhisattva Thich Quang Duc self-immolated in Saigon to call for reconciliation and peace. His act, filmed by the international media, shook the conscience of the world. Since Vietnam fell under Communist rule in 1975, 22 monks, nuns and lay-Buddhists have self-immolated to appeal for religious freedom in Vietnam, including twelve monks and nuns at the Duoc Su Pagoda in Can Tho on 2 November 1975. Under the fierce censorship of the Communist regime, not one foreign journalist was present to record these events. Their sacrifice was stifled in silence.

“It is therefore with a deep sense of communion and understanding, but also with infinite pain and grief, that I learn of the immolation of such young Buddhist monks and nuns in Tibet, and the escalation of violence by China’s communist regime to prevent the world from hearing their tragic cry. This situation is a challenge to all humanity. I call upon world leaders to take urgent action, demand an end to the violence and press for an independent international investigation into these cases of self-immolation.

“On behalf of the Unified Buddhist Church of Vietnam (UBCV), I pray for all those who have sacrificed their lives, and all those who have suffered repression in these peaceful protests. I wholly support the Tibetan people’s courageous struggle for survival, and share your aspirations for the right to freedom and life. Your suffering is our suffering. Your struggle is our struggle. The Buddhists of Vietnam stand beside you in this non-violent movement for religious freedom and human rights. For without human rights, human beings can never fully and freely exist.

“The UBCV will never forget the numerous appeals made by Your Holiness throughout the 1990s to obtain our release from the communist jails. During these dark days, we did not know of your efforts. Only when I was amnestied from prison in 1998 did I learn from the UBCV’s spokesman in Paris, Vo Van Ai, about your humane and crucial interventions. Today, I am still under house arrest at the Thanh Minh Zen Monastery, after almost three decades under different forms of detention. Yet I am always with you in spirit. You are always in my prayers, and I hope with all my heart and strength that you will succeed in guiding the Tibetan people through these difficult times”.

Yours in the Dharma,
Fifth Supreme Patriarch
Unified Buddhist Church of Vietnam
(signature and seal)
Sramana THICH QUANG DO
at 5:19 AM